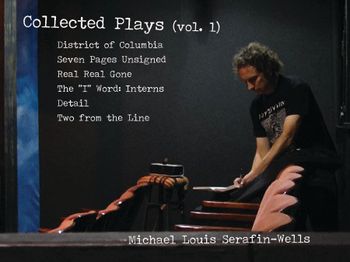 Two From the Line

Synopsis: Two men a get a little too personal watching a basketball game on television.

Synopsis: Brother and sister meet in a bar the week before Christmas to exchange gifts and warily attempt coming to terms with the family from which they're both estranged amidst a sudden and secretive crisis.

The "I" Word: Interns

About: "Handles the Beltway lingo with brains and Shavian brio” - The Village Voice

Synopsis: Idealistic Clinton White House interns face-off after one of their number is dismissed for leaking inside info to the press. Finally coming to grips with their disillusionment when challenged by their superior, herself a one-time intern for Senator Robert F. Kennedy, they find a renewed sense of hope in "the lifetime of work" required to further their shared beliefs and the understanding those beliefs can and must overcome the frailties of any one individual.

About: "The best of the bunch, with language that laces the natural poetics of the street with erudition, dramatic revelations and passionate resolves” - Variety

Synopsis: Two men brought together by the sudden and coincidental deaths of their fathers on the same day five years before, meet on its anniversary in an abandoned cemetery, ultimately confronting the past, each other and themselves.

Synopsis: December 21, evening of the Winter Solstice. "The Darkest Night of the Year". Still reeling from the suicide of one of their number, friends gather for an engagement party, escaping to the roof but unable to elude the difficult choices each of them now face.

Synopsis: On the eve of the 1988 Presidential election, a group of activists, loafers, students and ex-punkrockers must ask: what are one's morals really worth when idealism becomes inconvenient? And where does one go when it's time to leave your youth behind? Their answer, with humor and humanity, makes a passionate case for the despair people feel in coping in a society they view as sick with greed and hypocrisy.

Excerpt: "...All this was supposed to change in the 60's. It's twenty years later. What happened? Where are those people? They were going to make politics - and everything else - relevant. their big word, remember? The mainstream ate 'em up. they became as deaf as the generation they were dyin' to replace. Just look at the music, for one thing. Nothin' that came after they took off their big Koss headphones around 1973 mattered anymore. They stopped listening. They don't hear us. They got too busy inventing Classic Rock Radio and a national advertising strategy for The Gap. These people are not our friends!"